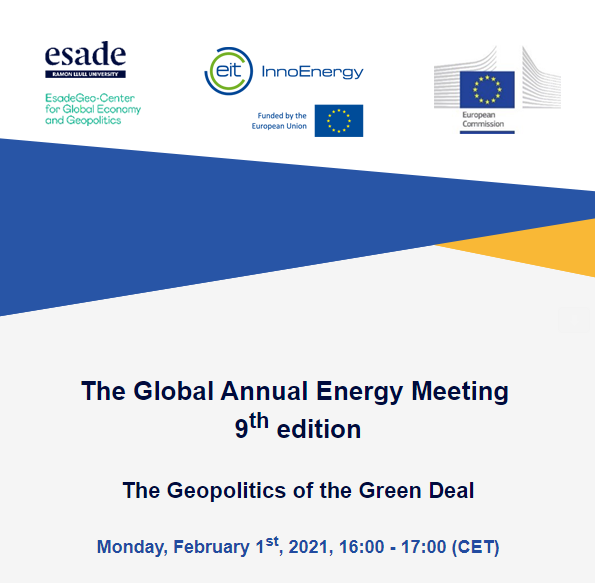 In 2021, the European Union’s pioneering Green Deal will increasingly come to life, through legislative proposals and other transformative initiatives. At the 9th edition of the Global Annual Energy Meeting, Esade’s Center for Global Economy and Geopolitics (EsadeGeo) will host, together with the Representation of the European Commission in Spain and EIT InnoEnergy, a series of webinars to explore the Green Deal in its global context.

“The Geopolitics of the Green Deal” brings together two key European Commission priorities: Europe as the world’s first climate-neutral continent, and as a strong global actor. Already, the EU’s trailblazing steps towards climate neutrality have reverberated positively across the globe. Yet the Green Deal and its related components – including the push for hydrogen, a proposal for a carbon border adjustment mechanism, and questions related to investment in the energy transition – may have further international implications.

At the first event, Kadri Simson, European Commissioner for Energy, and Teresa Ribera, Vice-President of the Spanish Government and Minister for Ecological Transition and Demographic Challenge, will join with Esade to discuss the impending transformations in the EU and the world as a result of the Green Deal. The event will delve into important questions such as: How will the European Green Deal influence the strategic positioning of other countries with regard to energy technologies and the fight against climate change? What challenges must the EU and its member states overcome in order to achieve the Deal’s full potential? What opportunities lie ahead, and how can countries and businesses grasp them?